Text and maps on this page are created directly from the SANBI Biodiversity GIS website. A map for Areas of Biome Stability provides an indication of which biomes are most at risk to the impacts of climate change. Maps are also presented for different future climate change scenarios.

South Africa has nine biomes. Each biome has a characteristic ‘climate envelope’ or a range and pattern of temperature and rainfall values within which it occurs. A drastic change in climate will naturally result in a biome shift.

Based on outputs from 15 global circulation models that were statistically downscaled, the National Biodiversity Assessment 2011 team developed three downscaled climate scenarios for South Africa, looking ahead to approximately 2050:

This means that the results presented in this chapter are not dependent on any particular global circulation model but hold under a range of possible climate futures. Use the tool below to view maps about current biome stability and the different future climate change scenarios. Click on the “+” sign to expand each section.

The areas in blue, in the map below, are predicted to stay within their current climate envelopes under all three climate scenarios, and hence are most likely to maintain a stable ecological composition and structure. The white areas, show areas where biomes are most at risk of change in composition and structure in the face of climate change. Click here for an interactive map: 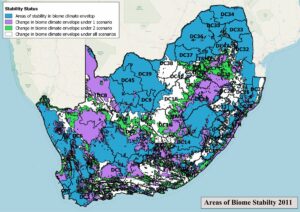 The map below shows the current delineations of the biomes in South Africa. Click here for an interactive map: 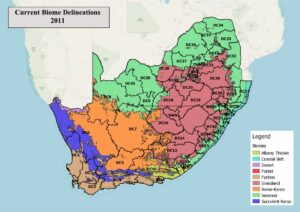 The map below shows biome delineations based on low risk (best case) scenarios. Click here for an interactive map: 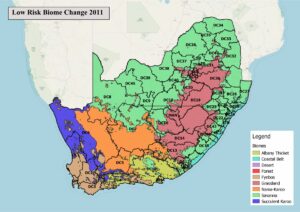 The map below shows biome delineations based on medium risk (intermediate case) scenarios. Click here for an interactive map: 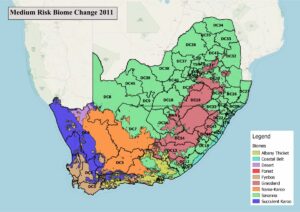 The map below shows biome delineations based on high risk (worst case) scenarios. Click here for an interactive map: 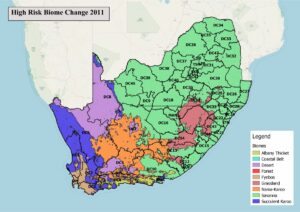