The Eastern Cape is South Africa’s second largest province covering an area of 169 580 km² which represents 13.9% of the country’s total land mass (Coastal & Environmental Services 2011). The Province has a population of 6.8 million, the third largest population in South Africa, making up 12.7% of the total national population (CSIR 2004; South African Government 2016).

The province lies between the Western Cape and KwaZulu-Natal provinces along the east coast of South Africa. Inland, the Eastern Cape Province borders the Northern Cape and Free State provinces, as well as Lesotho in its northernmost regions. The province is divided into two metropolitan municipalities: Buffalo City Metropolitan Municipality and Nelson Mandela Bay Metropolitan Municipality, and six district municipalities Figure 1, which are further subdivided into 31 local municipalities (South African Government 2016). The province’s capital city is Bhisho. Port Elizabeth and East London are the province’s two largest industrial regions, both served by well-equipped yet underutilised sea ports of international standard. The Eastern Cape Province is ranked as the poorest province in South Africa which can be attributed to the fact that the province consists of large former homeland areas of the Transkei and Ciskei, which were historically neglected for any development. High levels of inequality exist between these former homelands and the industrial centres (Coastal & Environmental Services 2011; CSIR 2004). 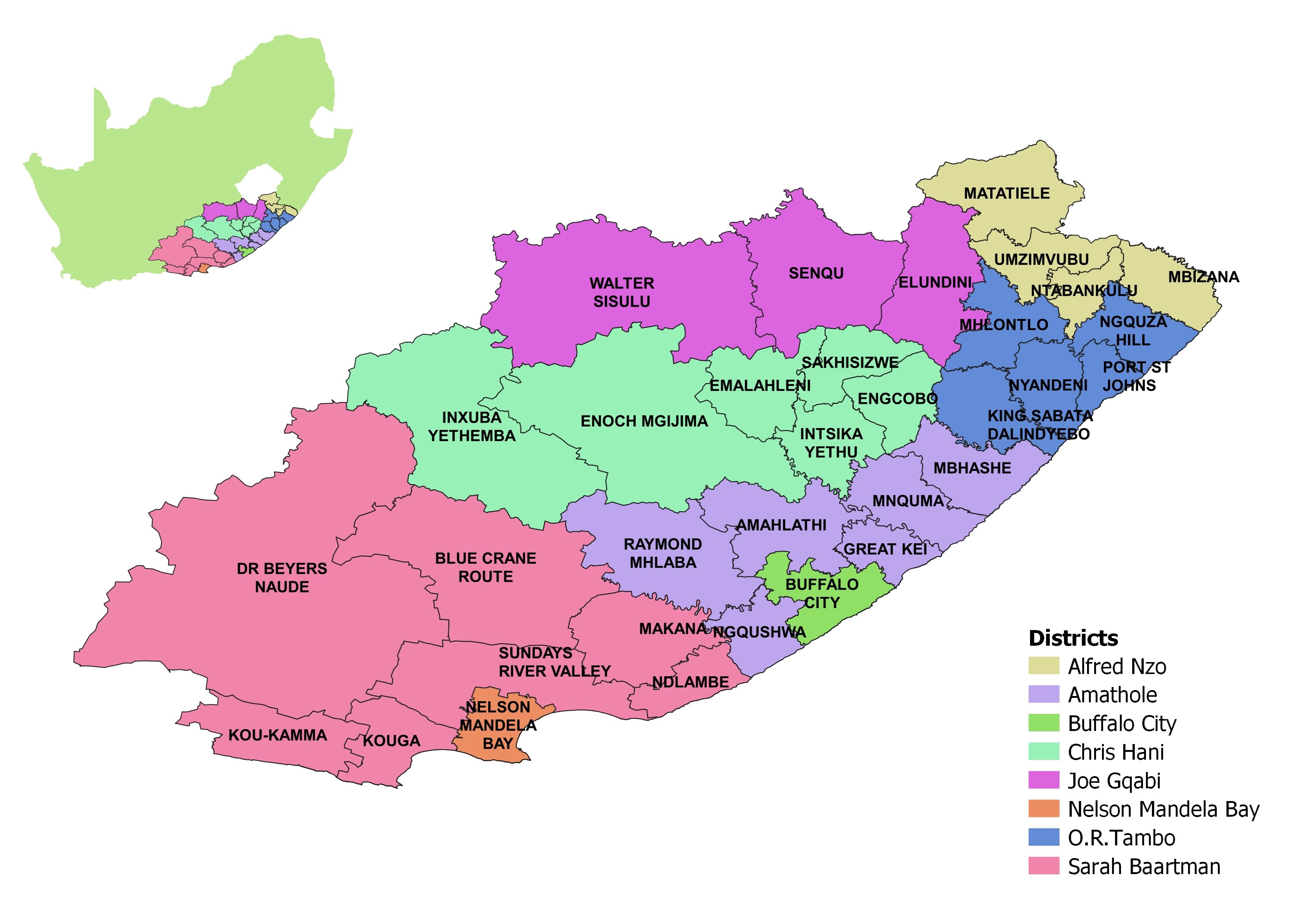 The Province is rich in biodiversity including semi-arid regions in the Great Karoo, mountainous regions in the southern Drakensberg, forests, and a coastal belt along the Indian Ocean (Coastal & Environmental Services 2011). Leading industries include automotive, tourism, agriculture, agro-processing and renewable energy. The Eastern Cape is regarded as having great economic potential and has the capacity to accommodate further industrial, agricultural and forestry expansion, in turn increasing overall GDP contribution (CSIR 2004). 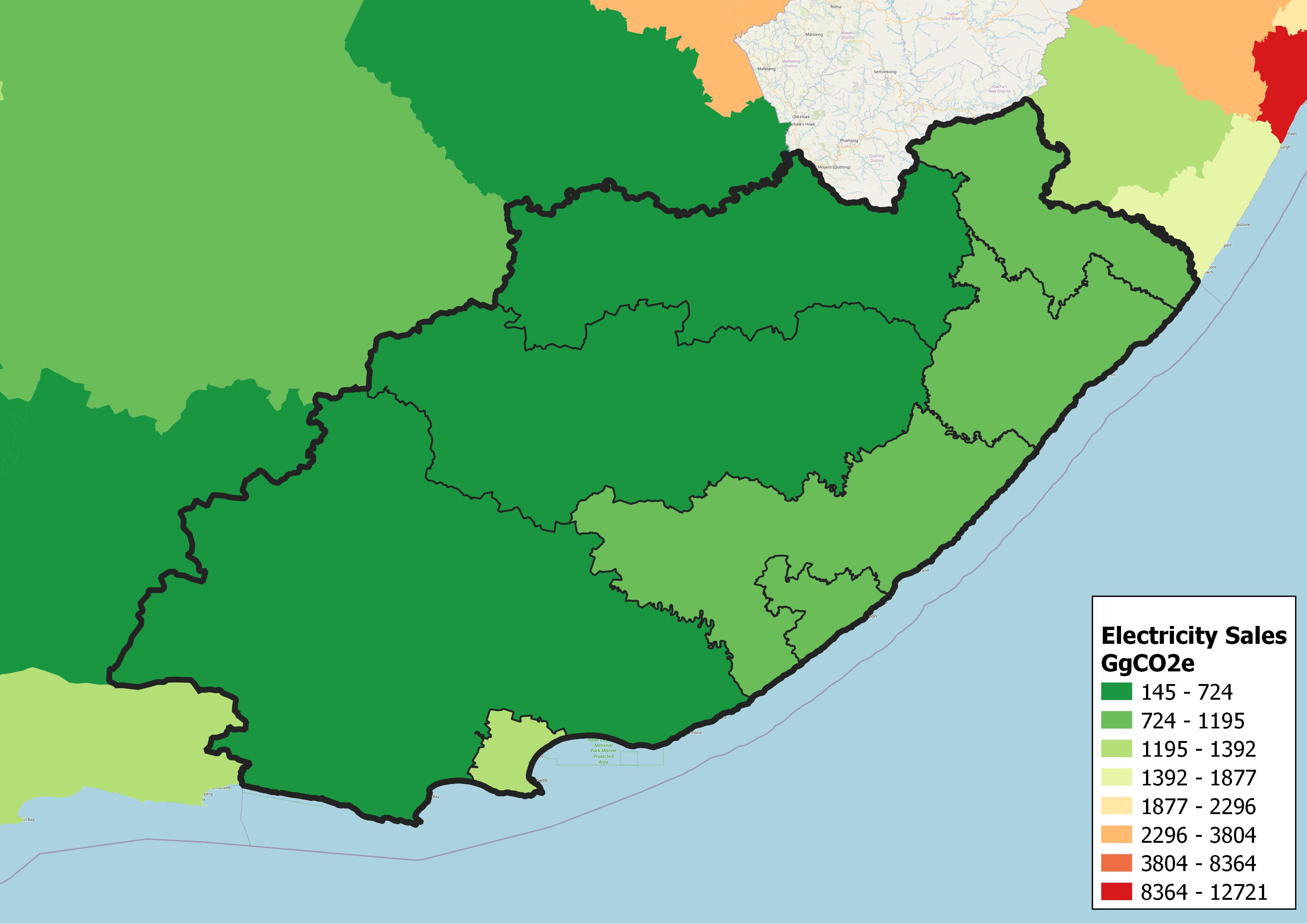 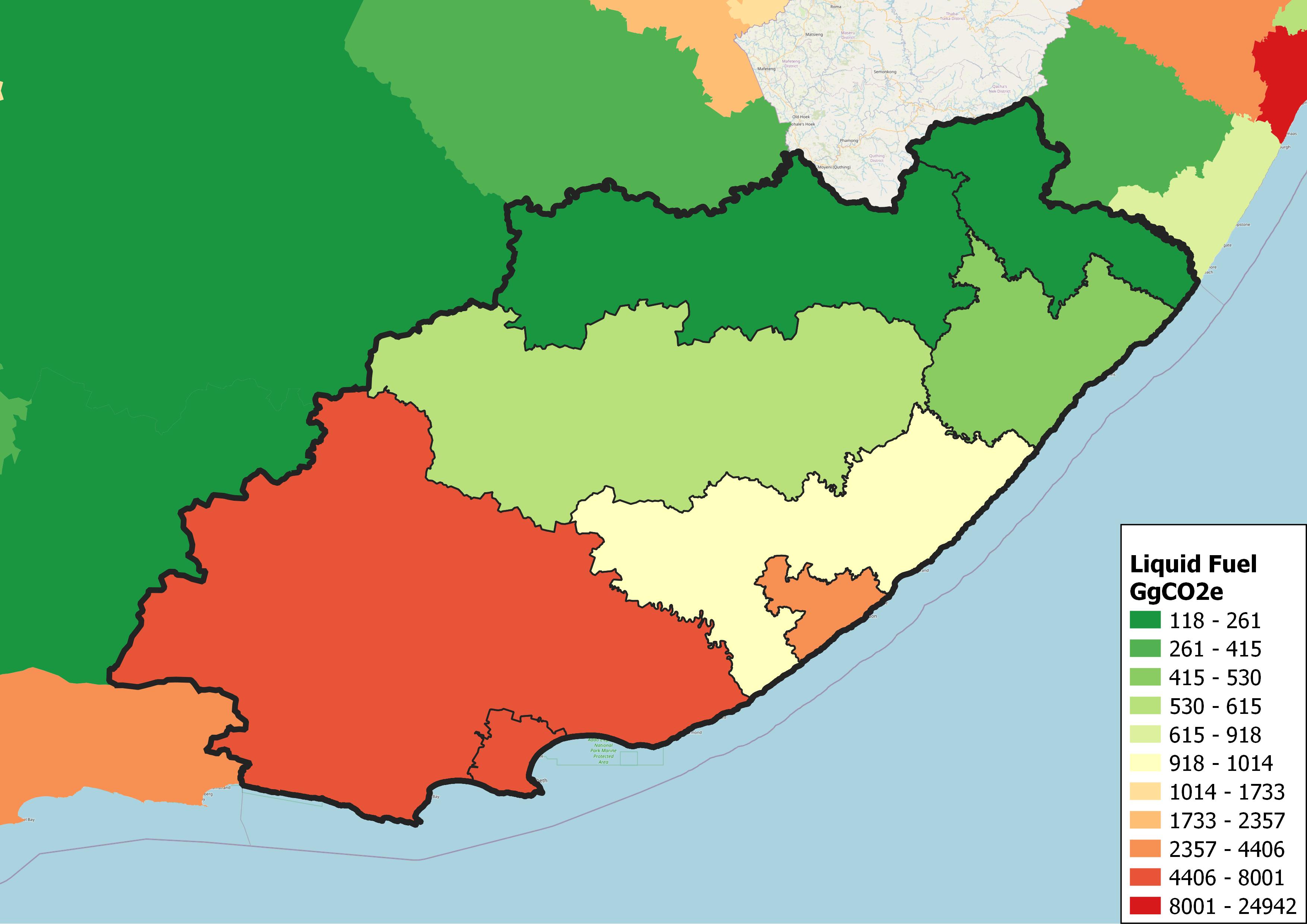 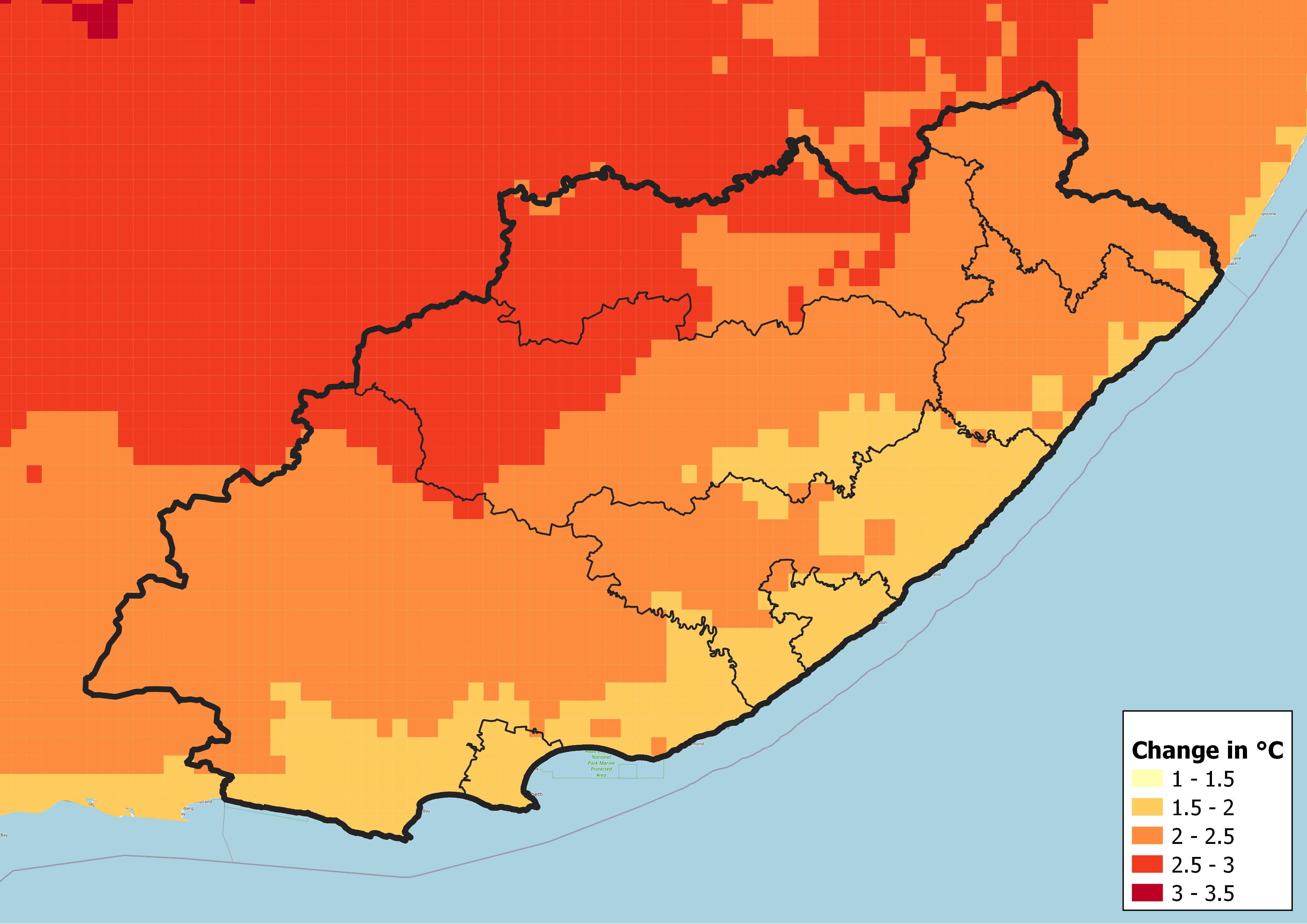 Figure: Projected changes in annual average temperatures throughout Eastern Cape over the period 2021-2050 under the RCP 8.5 scenario (CSIR 2019) 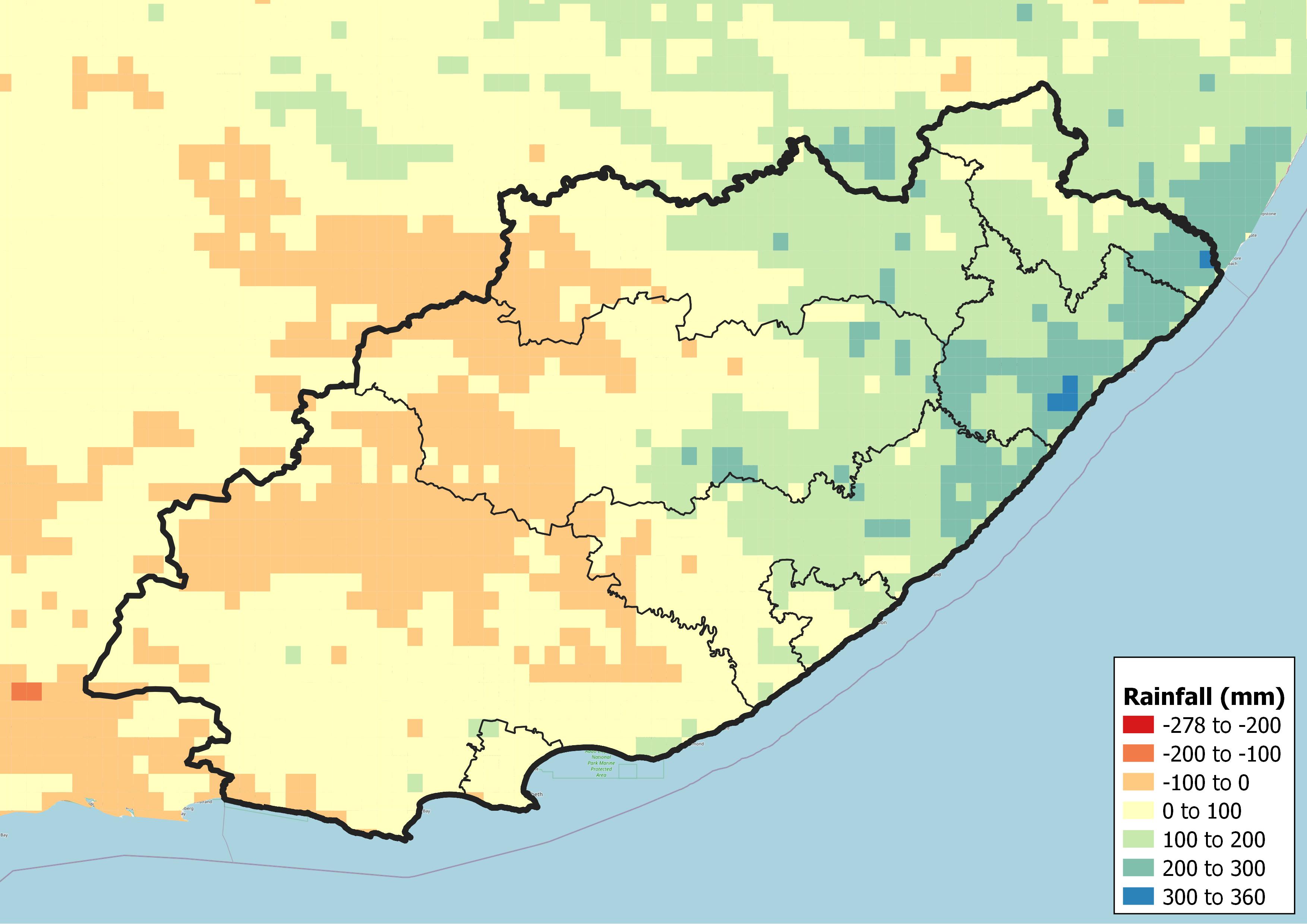 Figure: Projected changes in annual average rainfall throughout Eastern Cape over the period 2021-2050 under the RCP 8.5 scenario (CSIR 2019) 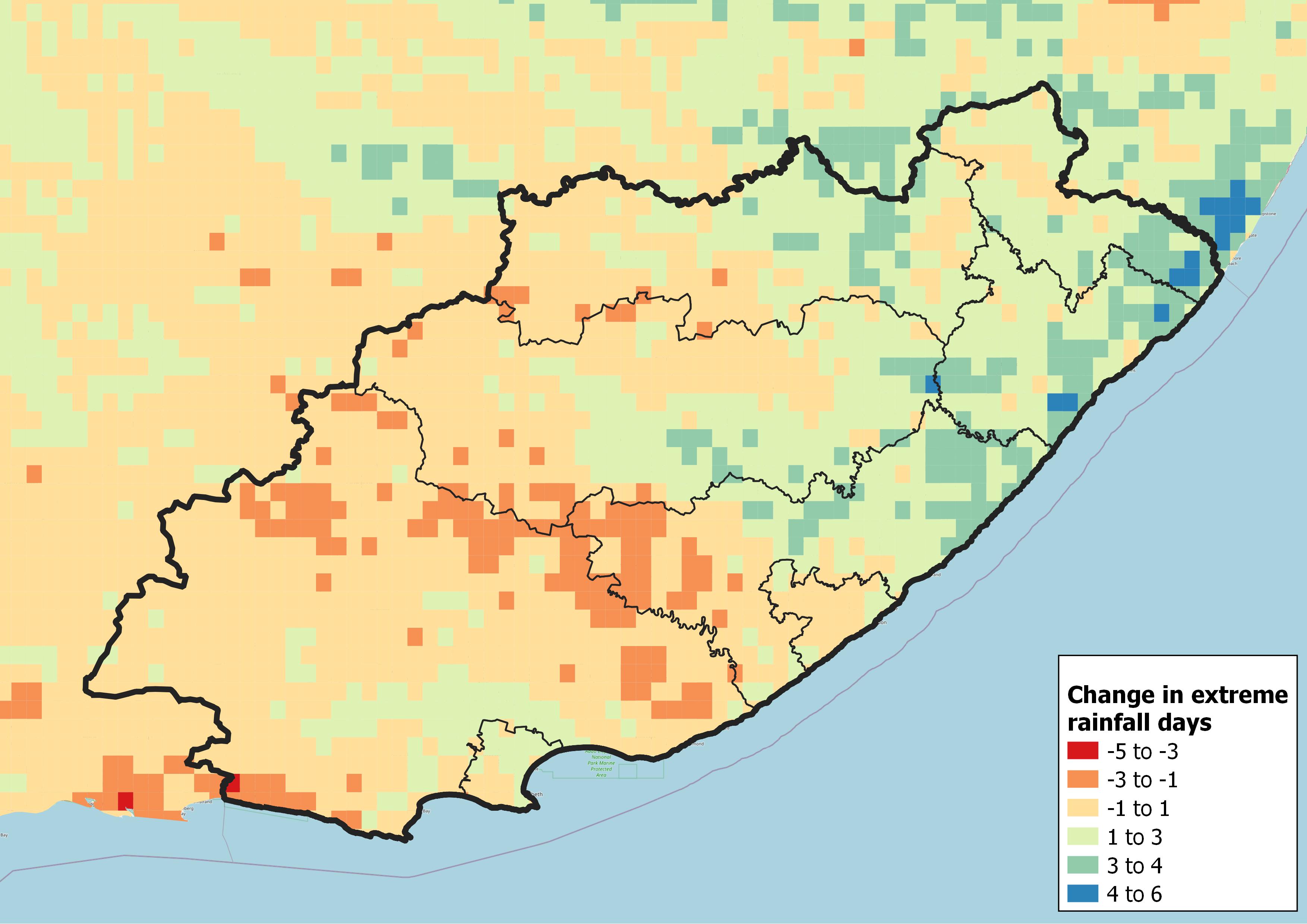 Figure: Projected changes in the annual average number of extreme rainfall days throughout Eastern Cape over the period 2021-2050 under the RCP 8.5 scenario (CSIR 2019) 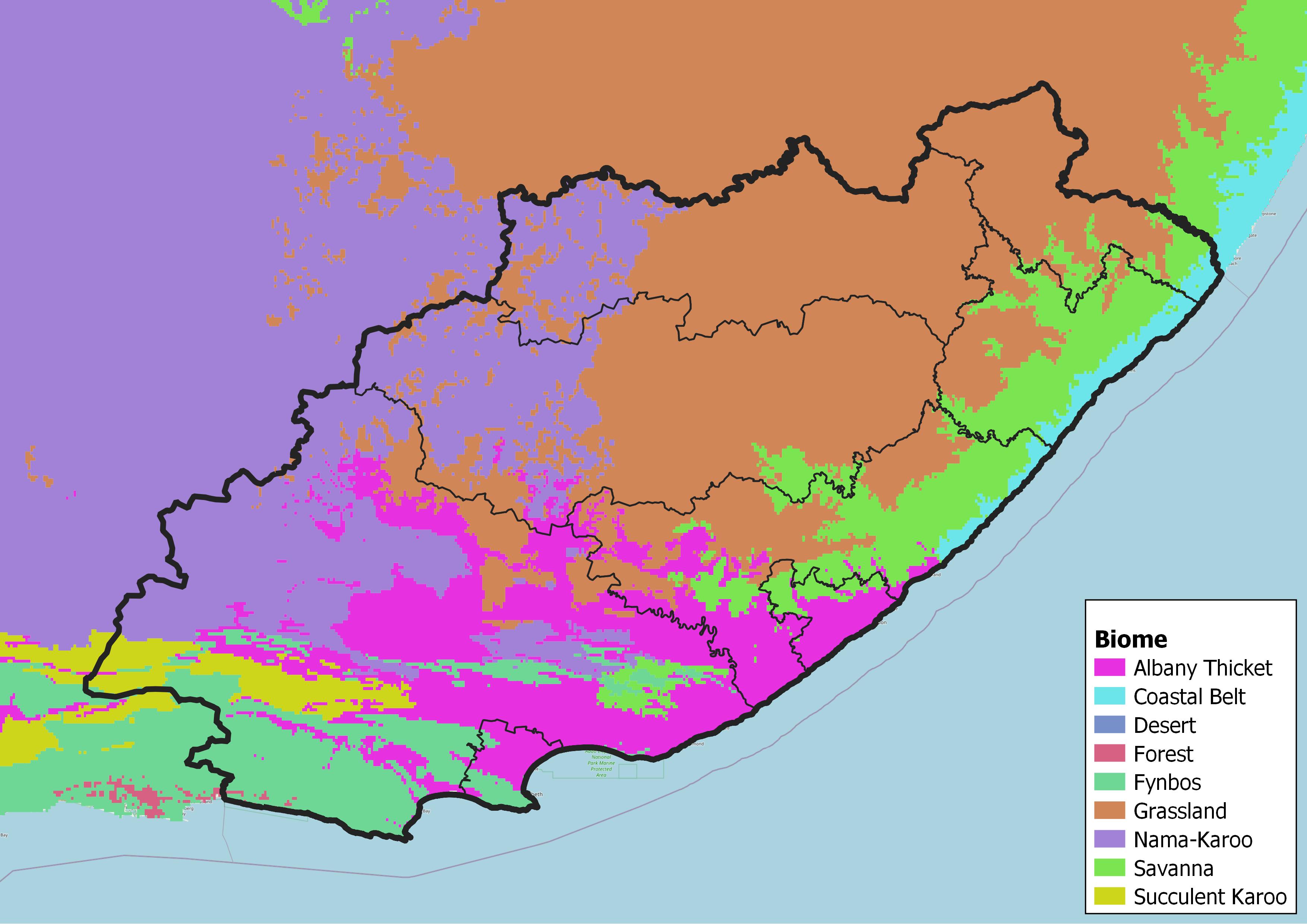 Figure: The current delineation of biomes in Eastern Cape (SANParks 2011a) 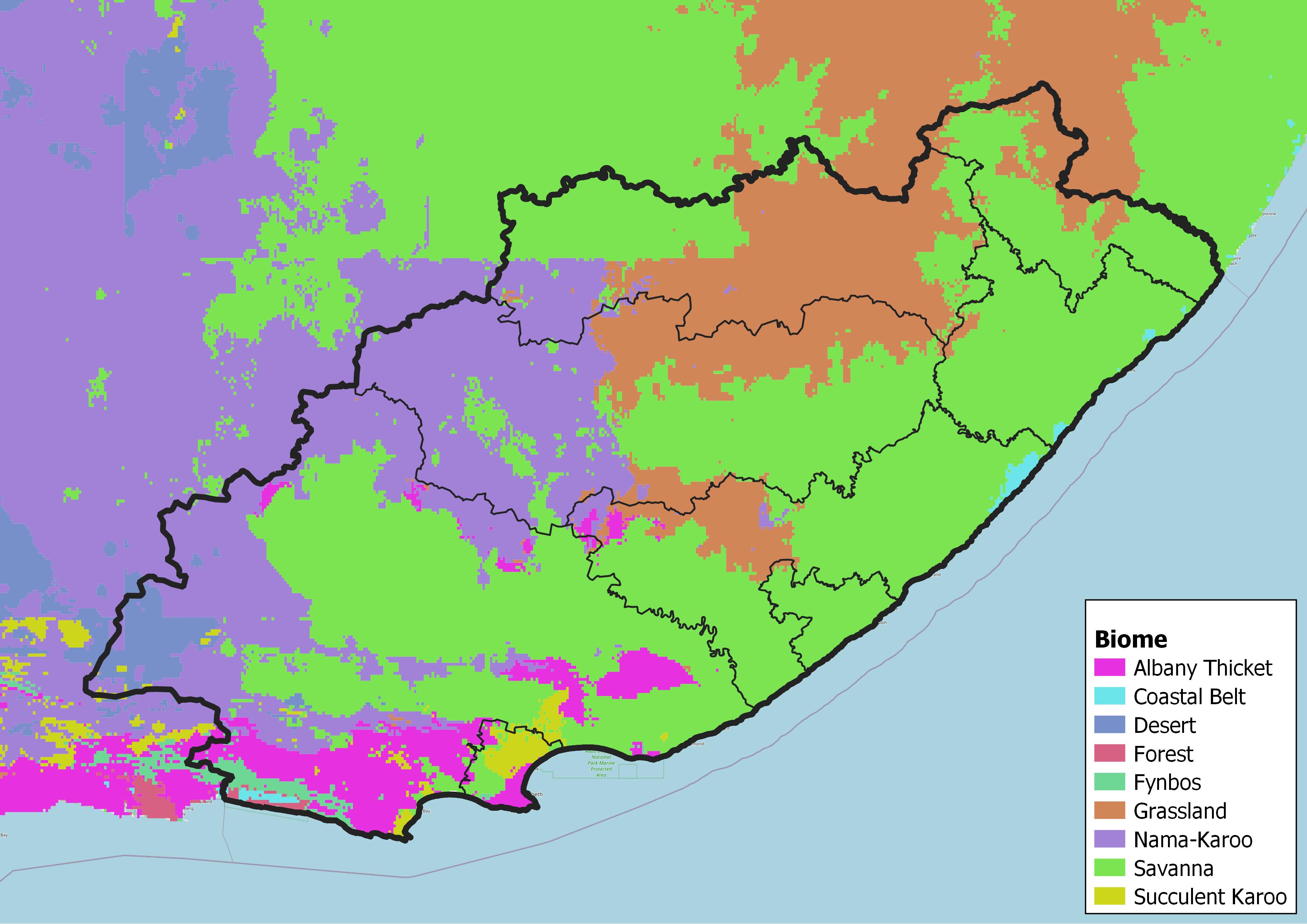 Figure: The predicted shift in biomes in Eastern Cape using a high-risk scenario (SANParks 2011b) 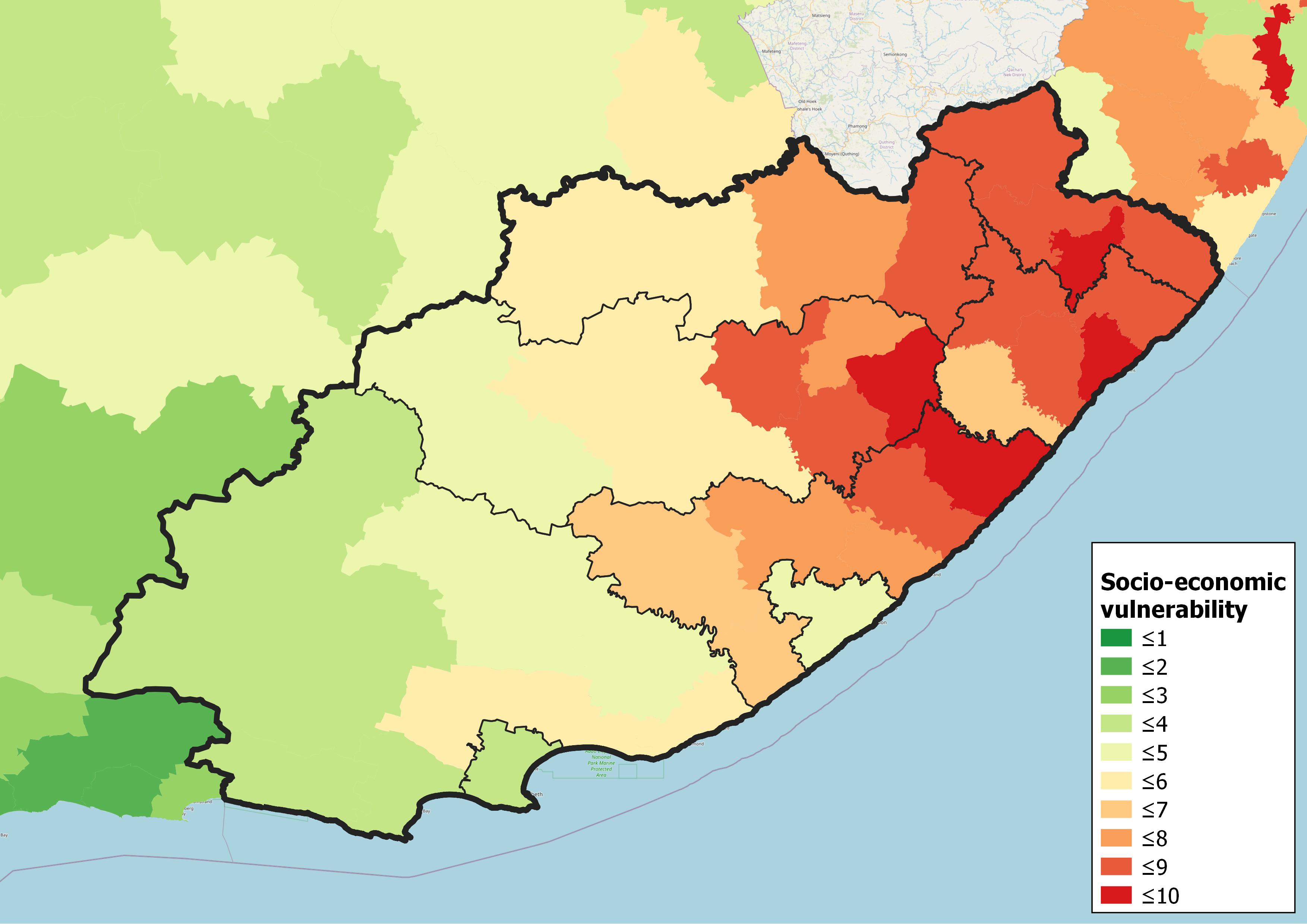 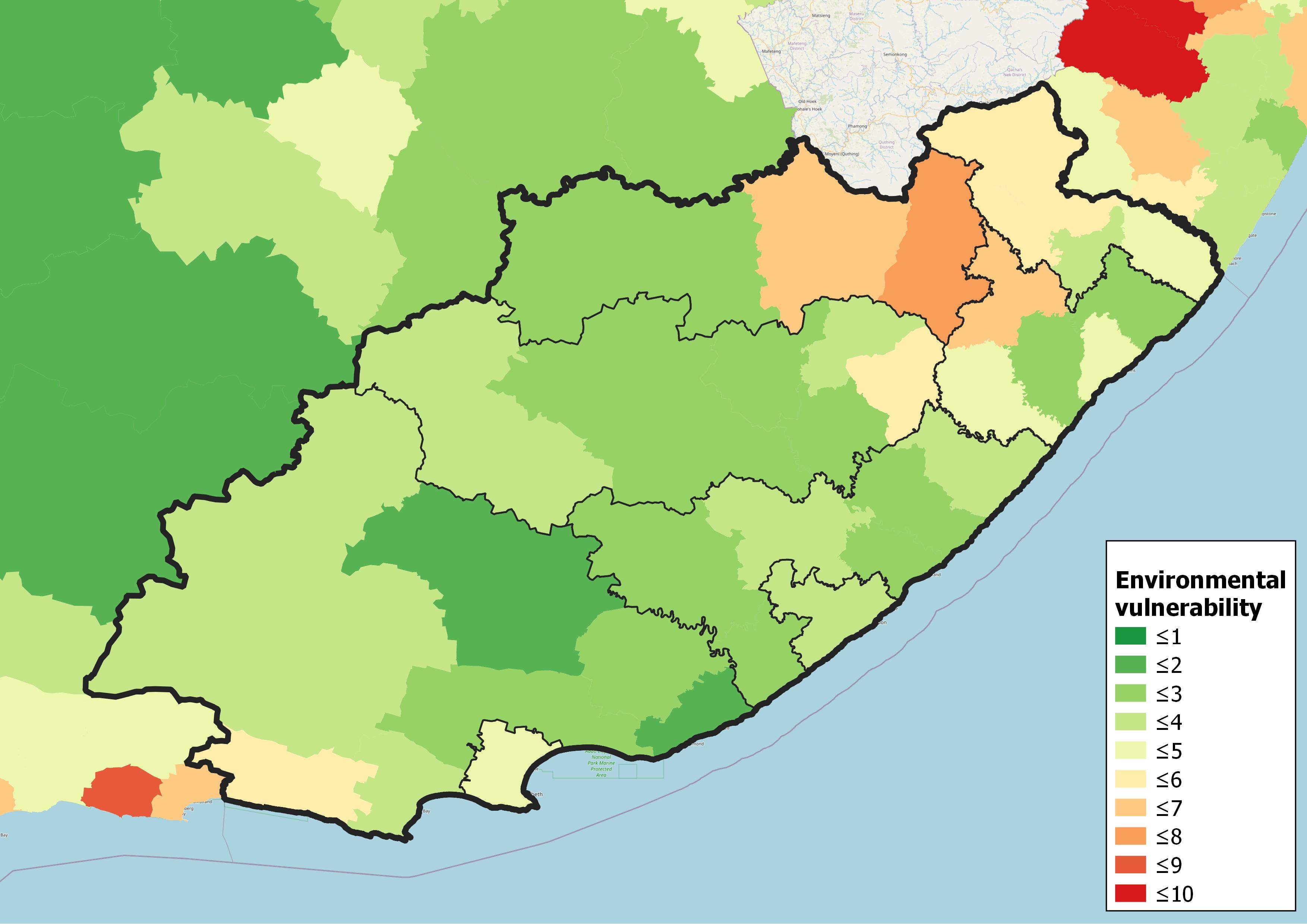 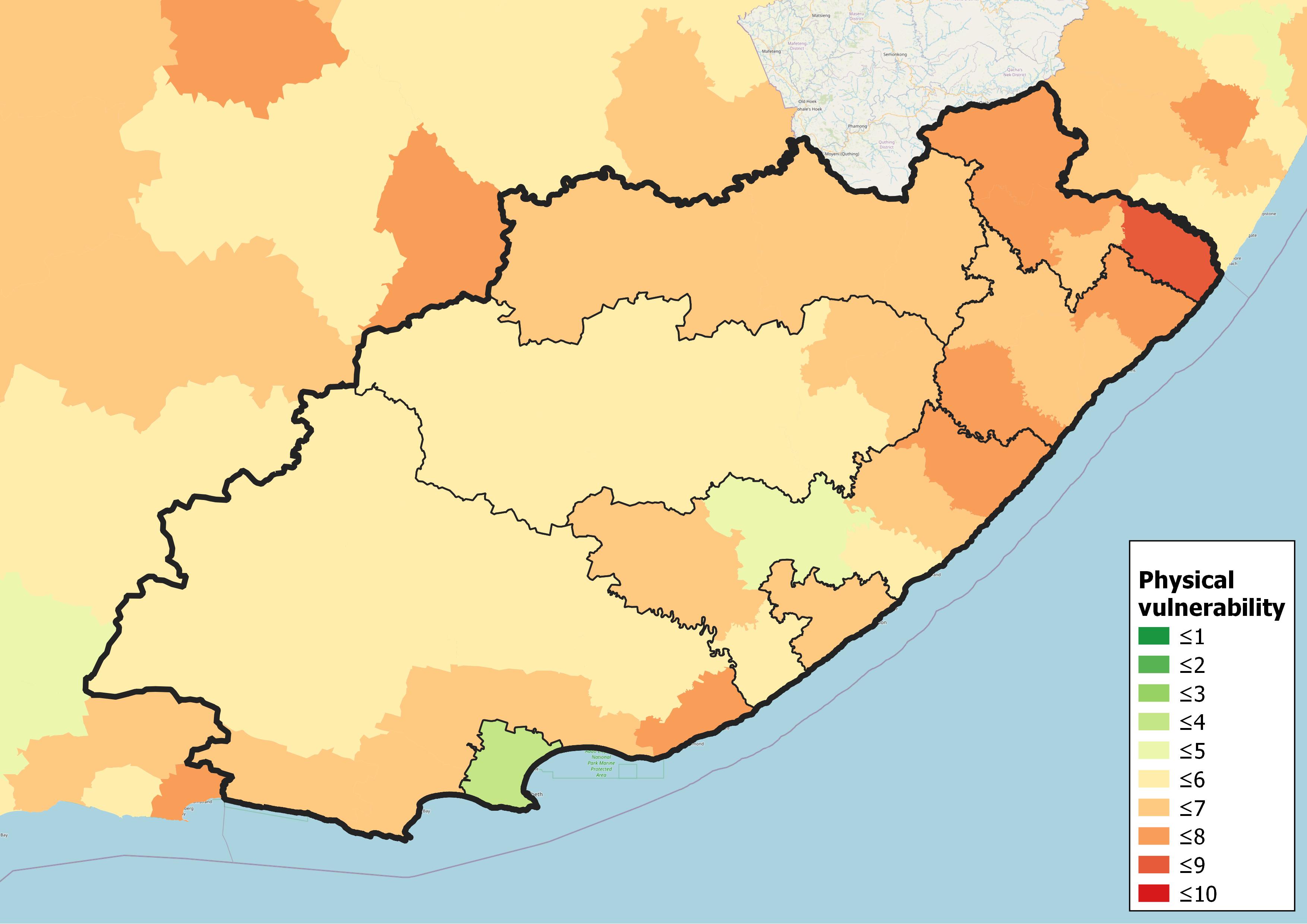 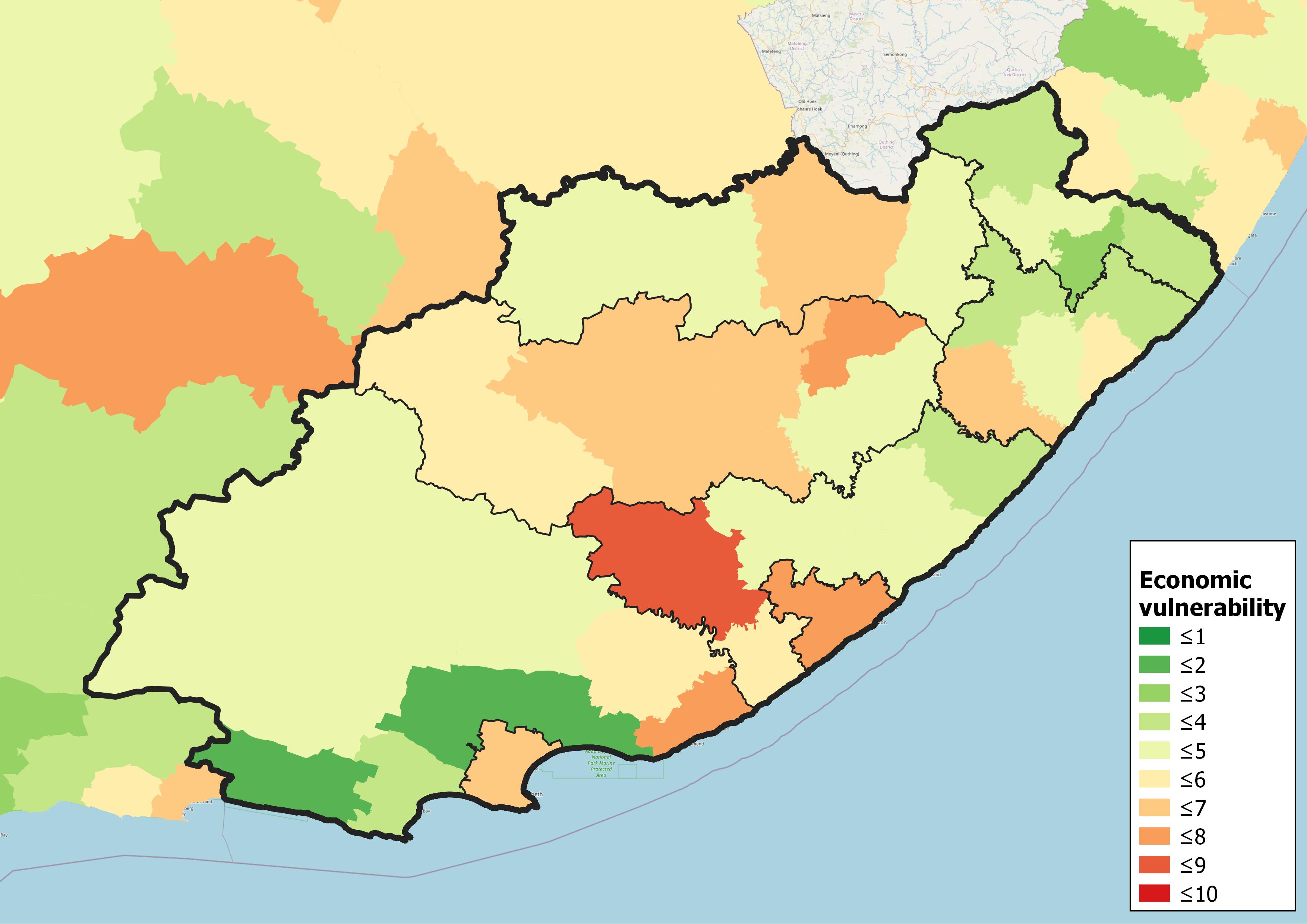